Catching a Swarm for a Top Bar Hive

Catching a swarm of bees is one of the most exciting things I’ve done. Not that it takes daring or any dramatic feat (no climbing trees or scaling rooftops for me). It’s just exciting. In the way seeing one of my goats give birth is exciting except with the bees I have a more active role.

As many of you know, I’m a new beekeeper. I recently caught my second swarm of bees from the (almost) same location as the first. My friend Aaron who, coincidentally, built my top bar hives, called about a swarm in front of his brother’s house in Albuquerque. Thankfully, I was able to drop everything I was doing and head out with my gear.

When bees swarm, they are full of honey and are looking for a new home so they tend to be more docile than an established hive. I haven’t gotten stung collecting a swarm, but you can get stung, so care should always be taken. 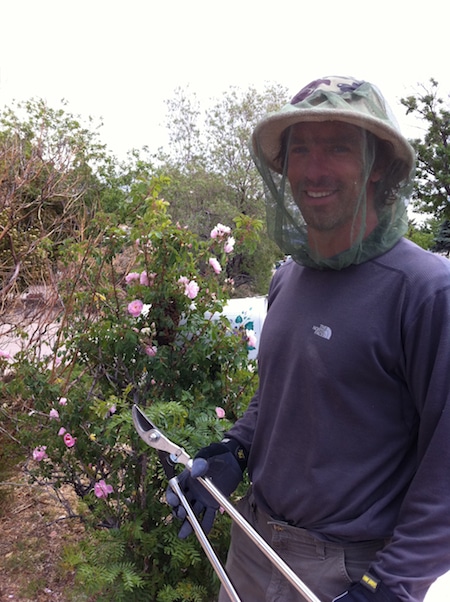 Aaron helps to catch the swarm of bees. You can see the swarm in the rose bush just above the pruners. I held the branch while Aaron snipped, then I lifted it into a large cardboard box.

To harvest the swarm, I brought a large cardboard box, tape, a bee veil and hat (I had an extra hat plus a mosquito net for Aaron to wear), pruners or loppers and gloves. I don’t have a protective suit, I just wear jeans and a long-sleeved oxford style shirt with my bee veil.

To remove the swarm, I cut off the branch (with permission) and laid it in the box. I waited about a half hour for the bees to “settle” and then taped up the box leaving a small opening for the bees to enter. I made sure that the queen was in the box. If she is, the bees will start fanning towards the box (you will know this when you see it). I left the box until dusk so that all the scout bees could make it back into the box. When I went back at dusk, I simply taped up the box, put it in my car and took it home to install in the hive.

Since it was cold and windy that night, I simply placed the stick with the cluster of bees in the hive. In the morning I opened up the top bars and thunked the stick against the hive to dislodge the bees then I replaced the top bars. 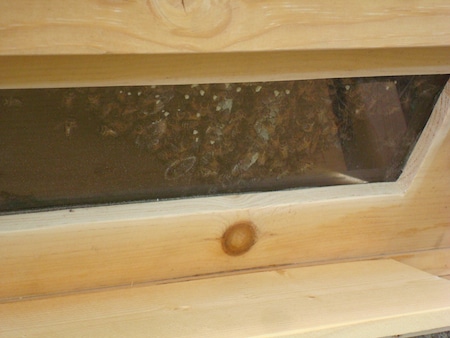 You can see the young swarm drawing fresh comb through the observation window in my top bar hive.

By the next day, the bees were already building comb across the bars. This is a smaller swarm than the last one, so I may give them a bar of capped brood from my more vigorous hive once they’ve built up their numbers enough to handle caring for the brood.