You are here: Home / Gardening / Caring for Orchids Indoors After Bloom

Everyone is interested in how to care for an orchid to get it to bloom. But how you care for it after a bloom is just as important.

The main thing you have to do to care for your orchid after it blooms is to cut the flower spike. Where and how long you cut the spike determines what happens next.

While most orchids cannot rebloom, moth orchids or phalaenopsis can. 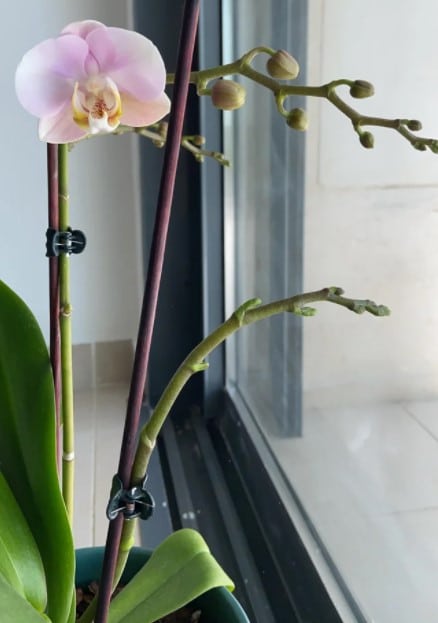 To get a rebloom, the flower spike has to be extremely healthy. Flower spikes that are weak or unhealthy will not be able to support another bloom. Generally, you can tell if the spike is healthy by its color. Anything brown or yellow should be cut off at the base.

If you find a spike that is healthy and looks strong enough to produce another bloom, how you prune your orchid determines what will happen next. To encourage reblooming, cut the stem back to the second or third node. 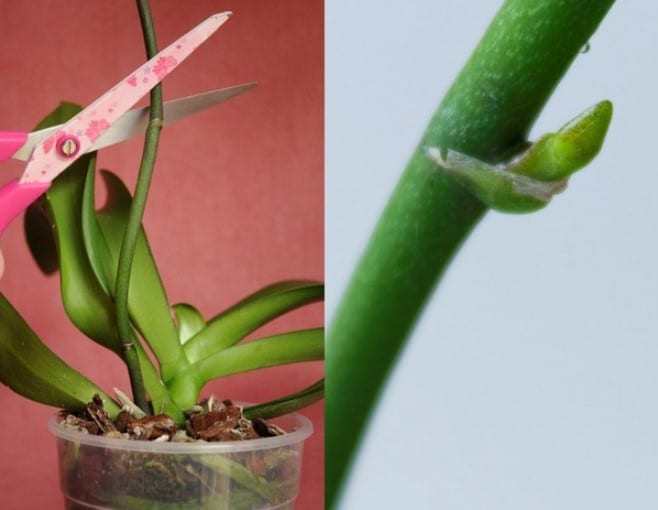 By cutting the orchid higher on the stem, you signal the plant to redirect energy to the flower spike instead of to the roots. That said, it’s important to care for the open cut appropriately to prevent problems with infections and disease.

Dip a cotton ball in cinnamon and dab it into the open cut. Cinnamon helps to reduce the chances of infection and helps the cut heal over quickly. That said, cinnamon should never be applied to the roots.

Another option is to use a drop of candle wax on the open cut to seal it off and give it an opportunity to heal. If you choose this method, be very careful with the candle flame, and try not to expose any other part of the plant to the wax.

After anywhere from eight to 12 weeks, a new spike should form. The flowers from this spike will be slightly smaller than the first bloom because the plant has less energy stores than it did the first time.

If your moth orchid has two spikes, don’t try to get both to rebloom. Doing so is asking way too much of your orchid. Instead, cut to the top-most spike, leaving the lower spike alone. This way, you’re telling the plant to invest energy in creating a new bloom.

As mentioned, moth orchids can rebloom, but other orchids cannot. If they’re particularly healthy, they may produce a new spike and a new bloom that way, but they will not bloom from a spent flower spike.

Most orchids store their energy in pseudobulbs at the bottom of the stem. If you see little rings around the stem when examining your orchid, these are scars from old leaves falling off. Leave them as they are important for energy production.

Pruning an orchid after it blooms is necessary to help it reserve and rebuild energy. To do this appropriately, you must first identify the pseudobulbs and be sure to never, ever cut them.

Some orchids send out spikes from the top of the stem while others shoot them out of the middle. When the flower spikes are at the top, cut above the node, leaving about ¼ inch of stem. When they are coming from the side or middle, trim the spikes themselves as close to the stem as possible.

Encouraging root growth requires cutting back the flower spike without hindering growth. To do this, look for the node that is closest to the roots. Nodes are brown triangular bumps located at the spot where a flower had bloomed.

Use clean, sterile tools like clippers, scissors, or a razor and cut the stem at an angle, right above the node. Don’t leave too much stem above the node, ¼ of an inch or so is fine. Anything left behind will shrivel and fall off, so there’s no reason to leave any more than that.

How to Promote Healing

To encourage the plant to focus on growing strong roots, it’s important to help prevent infection from the open spot where you just removed the flower spike. To do this, apply cinnamon or wax, as mentioned earlier. 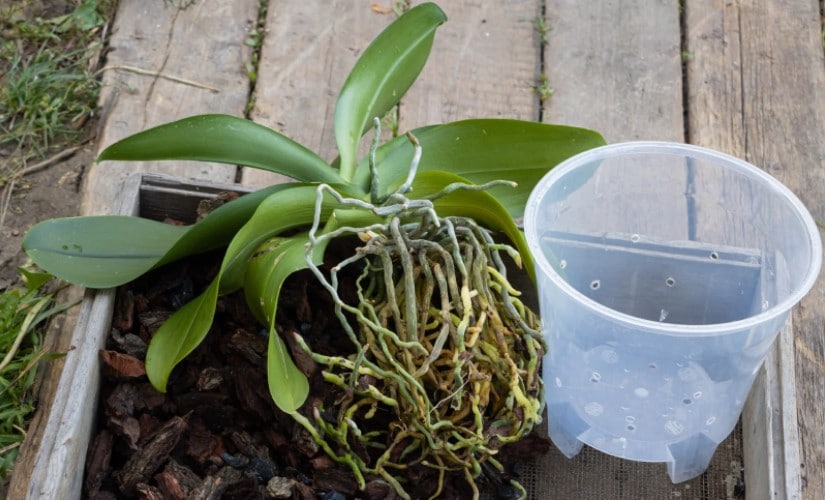 If you need to repot your orchid, the best time to do it is when the flowers have all fallen off. You don’t need to worry about repotting your orchid every year. In fact, if you use a high-quality orchid mix, you can sometimes go for five years before needing to repot.

Do a water test to determine if your orchid needs repotted. Water your orchid and lift the pot to watch how quickly the water drains from the container. If water drains quickly, the potting mix is still good. If the mix is old and has started to break down, water will drain more slowly, and it’s time to repot.

You can also sometimes judge from the roots. If your orchid roots are escaping the pot and pouring down the sides, it’s a good sign that it’s ready for something a little bigger.

Another thing you can do is test the soil pH. If the pH is too acidic, it means that the potting mix is starting to break down and producing acid, which is harmful to the plant.

When cutting your orchid, it is very important to use clean tools. If not, you risk introducing infection to the plant.

The easiest way to clean your tools is to wash them with normal dish soap, then rinse thoroughly. Then, use a cotton ball and rubbing alcohol to rub down the blade. Some people prefer to soak their tools, but the cotton ball method is more effective. You need to physically  wipe the blades to ensure you remove all the bacteria.

You also have to ensure that your tools are sharp. Using dull tools makes the cuts less precise and is more traumatic for the plant.