You are here: Home / Gardening / How Do You Know When Potatoes Are Ready to Harvest

Potatoes are one of the most popular crops in the world, so it’s no surprise that they’re a popular crop for home gardens. But since these starchy vegetables grow underground, it can be hard to know when it’s time to harvest them. 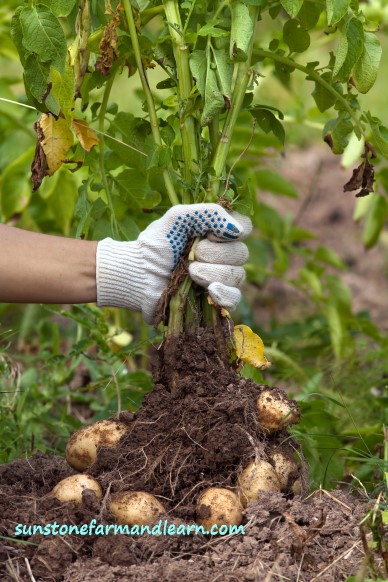 Some people say that potatoes will tell you when they’re ready. That may be true, but only if you know what to look for. Here’s everything you need to know about growing and harvesting potatoes.

What Kind of Potatoes?

One of the main things to consider about growing potatoes is that each type is a little different. Some varieties grow faster than others, some taste better than others, and some are hardier than others. Your best bet is to choose a type that is suited for the climate you live in.

Regardless of what type of potato you choose to plant, each generally goes through the same five growth stages. The timing may vary from one type to another, but in all, you should be able to observe these stages no matter what type you choose.

Knowing the growth stages of your potato plant goes a long way to helping you know when it’s time to harvest them.

This stage is pretty easy to identify. Stage one is when sprouts start to emerge from the seed potato and the roots begin to grow.

The sprouts develop more in stage two, putting out leaves and branches. At this phase, the plant begins using photosynthesis for energy instead of drawing on the nutrients packed in the seed potato.

In stage three, the stolons begin to develop tubers. Stolons are horizontal stems that grow just at the surface or below it. They’re also called runners and are essentially the mother plant spreading out as far as possible to grow an advantageous root system.

This growth occurs at or below the surface and isn’t always easy to see, but it often coincides with the green part of the plant above the soil developing flowers.

This stage is where the plant begins focusing on growing bigger and stronger tubers. Potatoes harvested at this point in the season are called new potatoes which are somewhat trendy and perfectly fine to eat. They’re just a little on the small side.

The tubers mature during the fifth stage, which means it’s time to harvest. If you look at the potatoes, you see that the skin is a little thicker and harder than at the new potato stage. The green part of the plant begins to die a bit, which is a clear visual clue that your potatoes are ready.

How Long Do Potatoes Take to Grow? 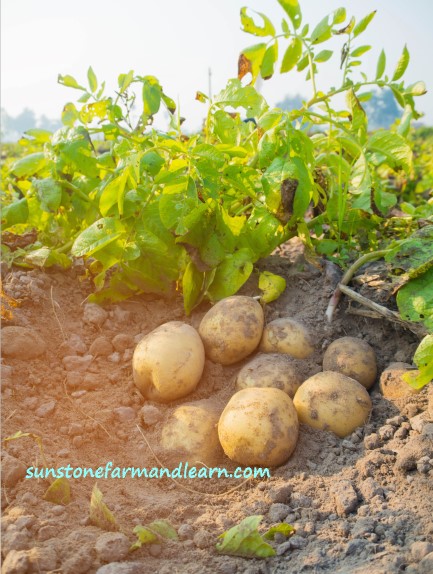 Potatoes are pretty versatile, though they are often considered a cold-weather crop. Depending on the type of potato you plant and your climate, potatoes can take anywhere from 90 to 150 days to grow.

That said, one of the biggest contributing factors to how long it takes potatoes to grow is the minimum and maximum temperatures in your region. These will determine when you would plant and how long you’ll have to wait to harvest.

In areas where the climate is very warm, choose early potatoes like Tima, Veneta, or Fortress. In hot climates, potatoes grow best in the cooler months of the year and should be planted in late fall or early winter.

How to Harvest Potatoes 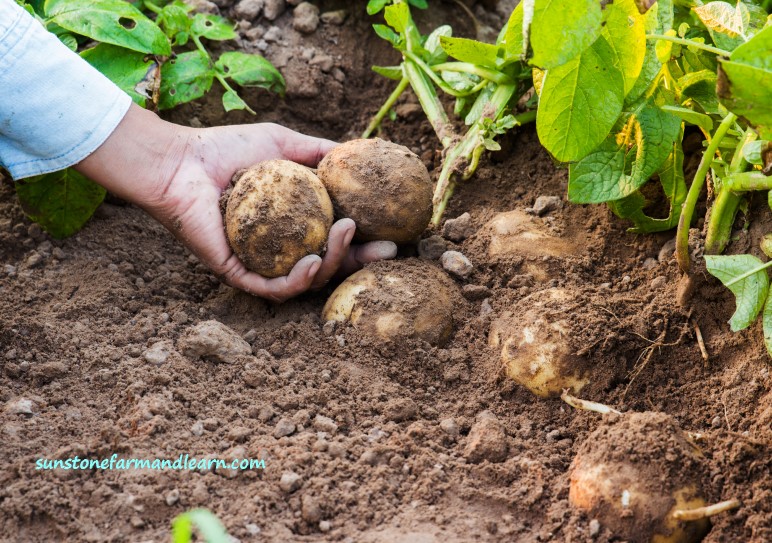 Again, it’s important to pay attention to the type of potato you’re planting and make sure you live in the right climate for it. Ideally, potatoes should mature at a point in the year when the temperature is mild, say, warmer than 40 degrees but less than 80.

New potatoes, those smaller early tubers we mentioned, are usually ready about six to eight weeks after planting. You can harvest a few of these from around the edges of the plant. Because they have thin skin, they only last about a week once harvested.

You can continue to harvest new potatoes from around the edges while you wait for the other potatoes to mature. Each plant will produce numerous new potatoes and three to six large ones.

When the green leaves and stems start to die back, stop watering your potatoes. If you live in a wet climate, you can also cut off the tops of the plants with pruning shears to help prevent rot. About two weeks later, lightly water to soften the dirt and begin the harvest.

Carefully dig around in the ground using a gardening spade, pushing the tines into the soil just on the outside of the growth and slowly lift up the dirt under and around the potatoes to avoid damaging them.

After harvesting, curing the potatoes can harden the skin and help them last a little longer. To do this, lay them in a dark place where the temperature is between 50 and 60 degrees for two weeks. Then, store the potatoes in cool, dry place so that they don’t turn green.

If you want to plant more potatoes next season, save the biggest and healthiest ones. If any of the potatoes from your harvest are diseased or unhealthy, throw them away.

There’s not set period for when your potatoes are ready to harvest, but you can usually tell when it’s time by getting to know your plant.

When the green stalks and leaves begin to die back, it’s a sign that the tubers are mature and ready to dig up. But, you can also harvest new potatoes a little earlier if you prefer.